Get a taste of competing on national television

Rod puts his award-winning barbecue skills to the test on national TV on “BBQ Pitmasters” airing Jan. 6. Rod takes you behind the scenes of what it’s like to be on a reality TV show.

You’ll have to tune in at 8 p.m. CST (click here to find the channel on your television provider) to see if the judges deem Rod’s barbecue the best in the city.

So what was it like to compete on “BBQ Pitmasters”? We asked Rod to recap the experience:

“So much went on behind the scenes during the taping of the Kansas City episode of BBQ Pitmasters. It’s hard to cook barbecue, a process of taking less desirable cuts at lower temperatures to make them succulent, mouthwatering, judge-worthy meat, and it is action packed.

Well over 12 hours of raw footage plus at least another 12 hours of day two interviews get whittled down to approximately 40 minutes of television. Our long cook, the brisket points, were actually revealed to us the afternoon before the shoot, allowing us enough time to prep, season, and begin cooking before sun up on the day the show was taped. In fact, I lit my pit at 2:00AM to begin cooking.

The crew didn’t begin shooting until sun up, long after I had begun to cook. There were cameras on the three teams the entire time, but as barbecue goes, there were long stretches of simply tending the pits. Despite long days and the stress of wanting do to well, I would do it again in a minute.”

Hungry for more? Get a sneak peak at what life is like on the national barbecue circuit. 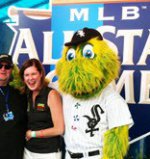 It is only natural that one of the country’s top barbeque teams hails from Kansas City – the city best known for its barbeque. Rod & Sheri Gray began competing as Pellet Envy in 2001.

In addition to being the pit masters of a national championship barbeque team, Rod & Sheri cater, teach, and promote barbeque as America’s cuisine.